Your man's car choices says a lot about him 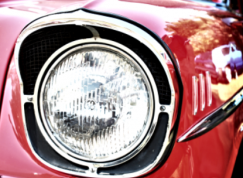 
There are some women who care a lot about the car their man drives and others who couldn't care less. There are also men who are the same -- those who worship at the altar of their gear shift and those who say, "If it runs, it's great." But his car choice is actually very telling about the kind of man he is and the kind of man he will become. For instance, a man with a Ferrari is trying to tell you one thing: I am rich and I have a high-maintenance lifestyle. For some women, that may reel them in. For others, it's a turn-off.

When my husband and I bought out mini minivan -- a Mazda 5 -- we read the sale demographics in the book. "This car belongs to a young, sporty family who are probably outdoorsy, live in the city, both have master's degrees, and have children under 5." Nailed us to the wall. But what does your man's car say about him romantically? I asked around and got a lot of answers. Here are 7 cars and the men who drive them:

Hummer/Escalade/SUV: This is the Big Daddy A-Hole car. He doesn't care about fossil fuels or the environment or you. Not only will this guy cheat on you, he will also probably steal your dog, eat raw meat, and vote Republican. Don't expect him to help with the kids or household, but he might enjoy bringing home freshly killed venison. He may even share it.

Honda Civic: This guy is practical, loving, and smart. He may be a grad student or a soccer dad, but either way, he is down to earth and perfect in every way. He's a keeper!

Minivan: This man is almost definitely married. If he is hitting on you, he is surely scamming. No single man would be caught dead in one of these.

BMW/Lexus/Infiniti: This says to me that he is either a real estate agent or some man with something to prove. I don't care how much he claims he needs a luxury vehicle, nobody REALLY needs one so badly. This guy will probably not go down on you much and will likely expect a happy ending after his next massage appointment. May also cheat, attend a health club with the Hummer guy, and frequent strip clubs.

Pick-up truck: If he drives a pick-up, it could say that he is a hipster (if doing so ironically). May also say that he is a down-home guy who is old-fashioned but will love you like a prince. On the other hand, if he has a pair of balls hanging from the back, he is horrible and must immediately be stopped.

Toyota Prius: Smug, thy name is Prius driver. This guy probably has premature ejaculation issues, and if he doesn't, then he surely will tell you not to eat that box of Froot Loops you have had in your pantry all year. "Commercial foods disgust me," he may say while slipping his ragg wool clad foot into a dirty Birkenstock.

Subaru: This guy is a rugged dude. He probably loves skiing or boarding, and if you're down, you will have a blast. But if you're an "indoor girl," best to back away now.

What car does your man drive and what does it say?

Arrested man admits to killings on the Costa del Sol