What Your "Drink" Says About You On a Date 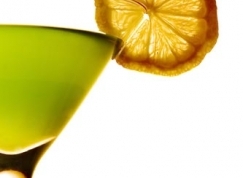 
What you order on a date can definitely send a signal, whether or not it's one you're conscious of. Sure, the list below is mainly full of generalizations, but there's some truth to every stereotype...

Martini: If you're a guy, you're trying to impress (and it's probably working). If you're a girl drinking a dirty martini, you're a hot mess: the dirtier, the messier, the hotter.

Vodka on the Rocks: Too self-conscious to actually order a martini.

White Russian: Obsessed with The Big Lebowski, and probably The Daily Show. Or, you just like to drink dessert.

Bud Light: You're easy going, laid back, and at home at a sports bar. If you're a girl, you know how to hang with the guys.

Stella Artois: You have no particular knowledge or affinity towards beer so you just order "Stella" cause it's familiar.

Vodka Cranberry: When in doubt, you stick to what you drank in college.

White Wine: You're definitely a woman. You're possibly a little uptight.

Prosecco: You're often a little uptight, but tonight you're looking to party.

Whiskey, neat: You're hot. Regardless of gender.

Jager: Secretly wishing you were hanging out with your buddies.

Vodka Gimlet: You're a huge dork, but you hope sort of in a cool way?

Appletini: You've left the kids with a sitter and you're ready to have fun!

Pimm's Cup: You're an Anglophile.

Old-Fashioned: Mad Men is your favorite show: you either want to be, or have sex with, Don Draper.

Margarita, on the rocks: You've decided to have a good time tonight.

Margarita, frozen: You're in Cabo.

PBR: You're drinking quickly on your way to a non-profit fundraiser, followed by a poetry reading in a former industrial warehouse.

Tequila Shots: You're either getting laid, or just getting through it.

Long Island Iced Tea: You have a drinking problem.

A beer, while at a Cocktail Bar: Overprotective of your manhood or unadventurous.

A cocktail, while at a dive bar: Insufferable.

Spanish Coca-Cola is the best in the world