The joy of being single 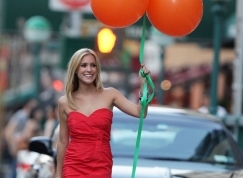 
For this article, various women have been asked, what's best about singledom. Let's hear it for freedom, independence and recreational sex!

Marriage is suddenly fashionable again. According to the latest figures, it is on the increase for the first time in years, which is great if you like wedding receptions. But one in three marriages ends in divorce and the benefits of being single are myriad. We took a highly unscientific straw poll of what women in their twenties and thirties see as the best bits of being alone and the results were uplifting. Let's hear it for freedom and independence, whatever your age.

Many levels of freedom
There are many levels of freedom, as Trish (35) points out. 'There's not compromising on things as small as what to have for dinner and whether to listen to music rather than watch TV, to bigger things like the way you decorate your house and how you spend your money,' she says. And bigger things yet, like being able to move to another country, if you fancy, notes Susanna, who is 32. Ultimately you have 'the freedom to be yourself, because you're not answerable to anyone', Yvette (37) comments.

Being single means you can do what you like when you like and you have the space to find out exactly what that is. After six years of being in relationships, Charlotte (30) says she is now rediscovering her taste in pretty much everything. 'When you're with someone, there's always give and take and you lose yourself to a degree,' she adds. Sarah (29) agrees: 'As much as you say you are independent and won't be influenced by your partner, you always are,' she says. '[If you are single] you don't have to care about what anyone thinks of your friends, family, dress sense, lifestyle, eating habits, drinking habits, etc.'

Being yourself - no matter how gross
Drinking came up a few times. As Aifric (28) so delicately puts it: 'When I'm pissed I can throw up and fall asleep on the bathroom floor or have a row with my reflection – and win – and not worry that someone might look at me and think, "Eeeugh! I'm going out with her," and, "She's gross."'

Eating can also be an issue. 'Don't expect a guy to miss a meal. Regardless of how much they eat, they still require refuelling at regular intervals,' 36-year-old Annabel notes. 'The bliss of being single is not having to interrupt shopping, sunbathing, reading, or adventuring because your bloke is whinging, again, about being hungry.'

Not having to explain yourself
Several people mentioned time to be alone, which is near impossible to get when you're in a relationship. Zoe says: 'The nicest thing about being single is that you can just take yourself off and do things on your own, like walk by the river or go to the cinema or read in the park, without having to explain that you're not in a mood or sneaking off for an illicit love tryst.'

Relationships eat time and not having one gives you the opportunity to do different things and see different people, which makes single life more varied than coupledom. As Sarah remarks: 'My life is so full - a lot fuller in some ways than if I was having to factor someone else into my time.'

If you are free of commitments, you can completely reinvent yourself, change careers, go back to school, set up a business or sell up and go travelling, according to Alex, who is 36. 'You can choose where and how you live and you can be as self-indulgent or batty as you like in your own four walls,' she adds.

A good old cry
Aifric cites the freedom to have a good sob: 'If I cry, no one automatically thinks it's their fault or tries to make me stop or make it better. Sometimes a girl just wants to cry.'

Being single means you can be spontaneous without feeling guilty. 'I can change all my plans for no reason,' Aifric says. 'I can go to the country for a night and decide to stay four days and the only person I'd miss would be my three-month-old niece.'

Hannah (23) comments: 'I can go out with my friends at short notice and I don't have to tell or discuss it with anyone. There's no guilt, it's great.' You don't have to consider phoning home when you're out late or justify long, legless girls' nights out, which you can have as often as you like.

You can flirt with anyone and everyone you fancy. 'You are perfectly free to reciprocate all male attention, which is marvellous,' Sarah observes. And you don't have to stop at flirting. You can treat yourself to a rampant waiter on holiday or pounce on a perfect stranger and roger him senseless, if you so desire – condoms at the ready, of course. Susanna describes it as 'the ability to enjoy the physicality of sexual release without any emotional relationship baggage'.

The perfect shag
Not only can you still search for the perfect shag, but on a more romantic note, you can also cherish the notion of the perfect man. 'Being single means that your hopes and dreams of finding that knight in shining armour are still vivid. Once you're married or living with a man, those dreams are shattered,' says Paula (30).

'So much in relationships is about sacrifice and compromise. I'll be prepared to do that again for the right person, but until then I'm enjoying myself,' says Sarah, reflecting the general view.

The next time someone blathers on about the joys of marriage, smile serenely and silently list the many pluses of not being paired. It might just stop the wedding cake sticking in your throat.