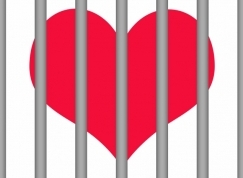 
A married Spanish couple have been sent to prison for reuniting.

During a troubled time in their relationship, the pair were placed under a distancing order which stopped them from coming within 500 metres of each other. The ruling banned the husband from contacting his wife under the law, which was set up in an attempt to tackle domestic violence. A court imposed the order in September 2008 after repeated conflict between them.

However, after a change of heart they reunited - but were promptly arrested by Civil Guard officers.
Officers found them living together in their home town of Montril in Andalusia.

The husband was sentenced to six months in jail and his wife was given four months.

20 Ways To Feel More Confident About Your Relationship (2)