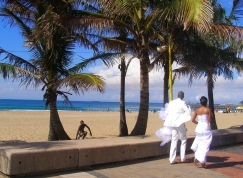 
Men with higher intelligence are less prone to adultery. This unbelievable fact was established by the research group at the London School of Economics, writes Geniusbeauty.

By analyzing two large-scale polls conducted in the US, researchers discovered that men with higher IQ had stronger commitment to monogamy.

Satoshi Kanazawa, a head of the study, says that, evolutionary, monogamy is a new phenomenon. Over the humanevolution, polygamy helped preserve genetic characteristics of Homo Sapience. But in the modern civilization, that need has disappeared.

Nevertheless, a lot of men are not able to get rid of the “heritage of the past millennia”, Kanazawa says. Many men won’t enter a new phase of evolution signified by stronger male marital fidelity. Only men with high IQ level, which is also one of the challenges of new era, can enter the new phase, according to researchers at the London School of Economics.

As far as women are concerned, their fidelity or infidelity doesn’t depend upon intelligence. Kanazawa said that their study showed no link whatsoever between women’s intelligence and marital fidelity.

Fergie: 'I Used to Be the Cheater'

Why is Beyonce Refusing To Talk To Her Dad?