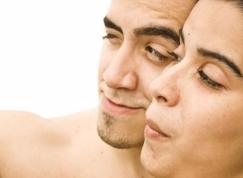 
It contradicts what we've always believed, but apparently, men want a relationship with hugs and affection - whilst, women just want sex.

And after 15 years together, all the stresses from bringing up a family and so on, are lost and the sex gets better at this point. One thousand couples were surveyed over five countries, with the relationships spanning from one to 51 years.

Julia Heiman, the report's author, of the Kinsey Insitiute at Indiana University in the US, says: "Being in a relationship has some health value - we can learn what makes them sustainable and happy."

Julia continues: "“It's possible that women became more sexually satisfied over time because their expectations change or life changes when their children grow up. The period of less satisfaction seems to overlap with the period of raising children, during which other things really take a focus.”

The findings, she admits is not what they were expecting. She says: “We became interested in relationships that endure and how might we begin to understand them. “Cuddles were more important to men in predicting the degree of happiness. The really useful message is we should not make presumptions about the genders. Because there's no way to be sure we're going to be right in any way.”