How to Talk So He'll Listen 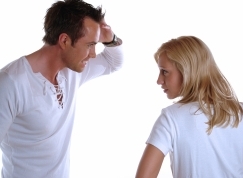 
Ever notice how even the nicest guy can act like an insensitive dolt when you're trying to convey something important? Men process information much differently than women, and as a result, your words often get lost in translation. But the solution is simple: Learn how to speak his language.

Talk side by side
If you're broaching a potentially sticky subject (stuff like your wanting to get married, or his partying too much), avoid a face-to-face conversation. "Although it seems counterintuitive, insisting on eye contact while hashing out an issue can actually make the problem worse," says Scott Haltzman, co-author of The Secrets of Happily Married Women. Looking him directly in the eye can make him feel threatened—and when confronted, men instinctively kick into survival mode, triggering a fight-or-flight response. To put him at ease, talk to him while you're doing something side by side—walking, driving, eating dinner together on the sofa.

Cut to the chase
According to a recent study, the male brain interprets men's voices as speech and women's voices as music. To ensure that he hangs on your every word, make your point as quickly as possible. "Men want to get to the bare bones of the matter," Haltzman says. "So grab his attention by using direct statements such as 'Here's why I'm upset' or 'The bottom line is this.'"

Let him know you need to vent
When you're telling your guy about your backstabbing best friend and he looks confused, it's not because you're not explaining yourself clearly or he's slow on the uptake. Biological differences make men innate problem solvers; the furrowed brow indicates that his mind is scrambling to find a solution. "When a woman presents a man with a dilemma, he interprets this as a request to fix her problem, not to simply listen," Haltzman says. Clue him in by letting him know what you need before you make your point. Try prefacing your story with "I just really need to get this off my chest." By telling him what you expect up front, he'll know what to do and be able to give you what you really want: his ear.

Stroke his ego
If it seems like every time you ask him for a favor your words go in one ear and out the other, you may need to butter him up more. Men are brimming with testosterone, which makes them competitive, and compliments help them feel important and superior. Let's say he never hangs out with your friends. Feed his ego by saying something like "You're so funny! Actually, my friends could use some cheering up. Can you come out with us tonight?" The positive reinforcement will challenge him to rise to the occasion, and the vote of confidence will make him feel needed.

Your man's car choices says a lot about him