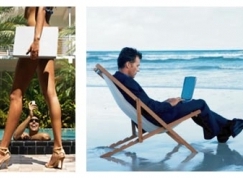 We were just thinking the other day how relieved we are that Facebook was just a twinkle in Mark Zuckerberg's eye when we were in high school.

We aren't entirely sure our fragile, angsty hearts could've handled the rush of photos, wall posts and status updates advertising the whereabouts and canoodlings of our various crushes. The gossipy hallways and yearbook inscriptions were about all we could take. Thanks.

So it came as no surprise when we read that a study of 300 college students revealed that Facebook incites a significant amount of romantic jealousy, adding fuel to the obsessive-compulsive nature of "crushing" in general. C'mon a Facebook profile is a 24-hour, all-access portal to a person's life. A stalker's fantasy. You can rummage and ruminate without the other person ever knowing.

The results published in the August issue of the journal CyberPsychology & Behavior proved that just about everything from new friend additions to benign Facebook activity made students feel jealous. The average student had 300 friends and spent 40 minutes a day on Facebook. However, those who spent more time on the social networking site reported even greater feelings of jealousy.

While we won't say these emotions are necessarily justified (don't turn a Facebook poke into a mountain), 75 percent of those surveyed said they would accept a friend request from a previous lover.Perhaps the most interesting tidbit from the study in general was how the sexes view Facebook differently. Girls, as the study says, were more likely to "monitor their partner's activities more closely" while guys took the opposite approach and "avoided" their love interest's profile.