Novak Djokovic Loyal to Marbella, working with Angeles Munoz to get it as Center for Elite National & International Sports @Puente Romano 2020
Sex & Relationships

Beautiful women cause stress in men 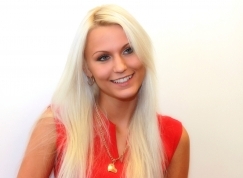 They based their findings on an experiment involving about one hundred of male participants. They were asked to solve a puzzle individually in a room with a model-looking woman and a man. As they proceeded with puzzle solving, a stranger man departed, leaving a participant alone with the woman.

The authors observed that majority of men felt stress. When left alone with a woman they blushed or went pale or lost their ability to speak. Researchers measured the level of hormones in participants as they left the room. They found soaring cortisol levels, a hormone of stress, pointing that men felt great pressure in a company of beautiful women.

The highest coristol levels were found in men who didn’t think of themselves as attractive. Interestinly, in the presense of a stranger man, participants felt less stress than that when left face to face with a woman.

How to fight sex drive killers? (1)

Spain’s women amongst world’s most stressed

The Five Hidden Signs Of Stress