Are you a love addict? 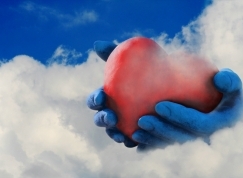 
If you've ever wondered if your quest for love is more obsessive than it ought to be, it may be a good time to stand back and consider whether you are a love addict.

What exactly is love addiction? And how does it affect people? In essence, love addiction means being so in love with 'love' that nothing else matters.

"I would drop all plans for David. As soon as he wanted me I was there," admits Susan, a love addict who is now in recovery. "David was the most important thing in the world to me. I would cancel friends at the last minute, just to be with him. I'd leave my kids with anyone to get over to his place. In the end, I'd leave them alone in the house if he wanted me over. I was ashamed of my lack of control. And the strange thing was that I didn't even like this bloke all that much. I just needed him."

Susan's experience is not unique. Love addicts feel that if they don't do everything their partner wants, then they'll lose him. "To a love addict, the person they're in love with becomes a god," says Dr Michael Gormely, GP and clinical adviser to Life Works, a mental-health clinic in Surrey that specialises in treating addictions. "People don't turn up in my surgery saying they're love addicts; a doctor has to ask some searching questions to find it," explains Dr Gormley. "Love addiction is more rare than alcoholism or drug abuse, but it's there." Dr Gormley admits that in a sense this is a new label for an existing condition, neurosis, but it's a label that fits a growing number of people perfectly.

And is it entirely surprising that doctors and therapists see it more and more these days? "Our obsession with love pervades every aspect of popular culture, from romance novels to pop songs," says Brenda Shaeffer, American psychologist. "Our culture models a dependency that says we cannot live without another person, sex or romance. We can become dependent almost unconsciously."

So what other symptoms are there, and how can you know if you're a sufferer? One big tell-tale sign is that love addicts often have sex far too soon after meeting someone, feeling that this will secure the new person's 'love'. Other love addicts are addicted to the early lovey-dovey stage of a relationship, and so will dump a bloke as soon as things lose the initial spark, and move on to the next bloke. And the next. And the next. Some love addicts become compulsive speed daters and have been known to become so engrossed in speed dating online that they forget to pick their kids up from school. The classic worst-case scenario of a love addict is, perhaps, the woman who stays with a man who beats her - because she is so desperate for his 'love'. In all cases the love addict's notion of 'love' is completely distorted and the addict is unable to have the normal loving relationship that they truly want.

Experts say that people who've had a rocky childhood with emotional traumas are far more prone to love addiction, as they often turn into very needy adults, constantly seeking approval. Also, studies have shown that falling in love produces a substance in the brain called phenylethylamine. "This causes that euphoric "can't eat, can't sleep" experience that people feel in the early stages of love. It has a similar effect to cocaine and other amphetamines," explains Steven Lanzet, addictions consultant and clinical director at Life Works. Another important factor is that someone who's been addicted to alcohol or gambling or drugs often gets over the first addiction only to replace it with another addiction - this secondary addiction is often love.

And don't think love addiction is exclusive to women - men are just as prone to it, often turning into stalkers when they give in to their obsession with someone.

Love addiction support groups based on the model of Alcoholics Anonymous are being set up in the UK - they're often linked to sex addiction support groups because sex and love addiction are closely linked. Susan decided the time had come to get help when, at the age of 31, she found herself agreeing to do sexual things that she didn't approve of with the bloke she was obsessed with. "I felt so degraded I couldn't take it anymore. I found a counsellor who diagnosed me." After that Susan went through therapy, attended support groups and then spent a year without a man, which she's truly proud of. She has a partner now - a man who she both likes and loves - but she has to watch her tendencies. "I may go in and out of support groups for the rest of my life," she says. "But for me to have a achieved a normal relationship is a miracle."

20 Ways To Feel More Confident About Your Relationship (2)