5 Things That Make a Woman Sexy 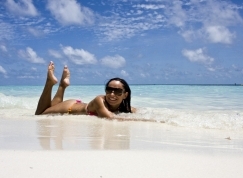 
Real guys answer: what attracts them to a woman.

Maybe People crowned a “Sexiest Man Alive” but we think the ladies are pretty sexy too! What does make a woman sexy? Surely many things, but we asked some real guys what they found to be the most sexy features in women.

1. Confidence: Confidence was overwhelmingly the top answer. “When a woman is sure of herself, it’s a big turn-on,” said Kevin from Los Angeles.

2. Eyes: Despite another pair of things you think they might be eyeing, eyes are actually the body part men mentioned most!

3. A nice figure: Not tiny, curvy, tall, or short, just “nice,” and by nice, all of the men we spoke to had a different way of defining that. Some like “curvy” while some mentioned that they like “tall, thin” girls. So sometimes, ladies, it might just be that that man you are eyeing has a thing for big booties, and you pride yourself on your size 0 frame. It’s not wrong, it’s just not what he is looking for!

4. Grooming: Ladies, it is worth the extra time at the nail salon, and the time you are spending on your hair and makeup – guys notice good grooming! “A girl can be a knockout from far away, but if you get close and her breath smells like smoke, her nails are scraggly, and her hair is not brushed, I think ‘Ugh, I don’t want her to touch me!’” Allen from Stamford, CT says.

5. Dressing for her figure: Men rarely know what season your shoes are from or that your top is actually from Ross Dress For Less. The men we talked to mentioned that they like when a girl dresses appropriately for her figure. “When I see a curvy girl in a dress that compliments her figure, it is a big turn on. When women dress in clothes that are trendy but do not fit them right, it’s very unattractive,” Ron from Queens said.

The joy of being single (3)