5 Things That Make A Man Sexy 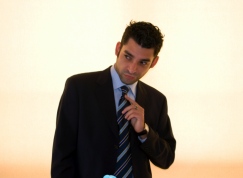 People magazine will reveal their Sexiest Man Alive this week – who will it be? Although People has their own system for selecting the reigning sexy man, we wanted to know, what do YOU think makes a man sexy? We asked real women, what are the things that make you really think a man is sexy? Quite a few of the answers were physical, but still – you all appear to have your values in line – you do weigh kindness as more important than abs!!!

1. Confidence: The answer that occurred overwhelmingly more than anything else was confidence. You all noted that a man who is sure of himself is the thing that makes him most sexy. “When his guy friends are all doing one thing, but he says he is going to do another thing, THAT is hot,” Jane from Los Angeles says. “And it’s even hotter if they then all go along with it!”

Ellie from Houston echoed Jane’s statement. “When a guy says, ‘This is my girlfriend’ proudly and doesn’t care what his buddies say, that is sexy!”

2. Kindness: Who says nice guys finish last?! You all thought that a man who shows kindness is sexy!

3. Stable: Financially, emotionally, socially – many of you mentioned that a guy who seems very stable, not frantic and running all over the place, is very attractive. “I love that my boyfriend is always calm and keeps his cool – like Barack Obama – he doesn’t freak out or show too much emotion when the going gets tough, and that makes me feel safe with him!” Jessie from Stamford, CT says.

4. Abs: Those of you who went the route of mentioning something physical, overwhelmingly mentioned abs! Next on the list were eyes and arms.

5. Being a Leader: “I love me some Alpha Males,” Krissy from New York said. Many of you mentioned that you like a man who is the leader of his group of friends, or a leader at work.

Tell us: what do you think makes a man sexy?