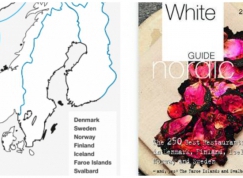 All restaurants are rated and grouped by country, category and location.

What makes us so sure that we serve up the best of the Nordics? First of all, we've been there. Every single restaurant in the guide is visited at least once a year. Our team – consisting of more than 80 reviewers – continually visit, assess and re-assess restaurants. These restaurants are always booked under false names – and White Guide always pays the bill. That makes us well-informed – and, above all, independent. That independence is fundamental to our rating process, as is the doctrine of transparency in our grading system

The White Guide has been the leading restaurant guide in Sweden since 2004 and was launched in Denmark in early 2014. The guides cover over 900 restaurants in the two countries, promoting continuous development in the world of gastronomy in this dynamic region. The first edition of the White Guide Nordic was released a year ago.

A list of all the the restaurants in the White Guide Nordic 2016 can be found HERE.