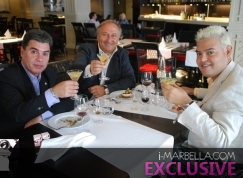 
On the occasion of the upcoming "Days of Chocolate" at the Hotel H10 Andalucia Plaza that will take place from 15-18th of November, TV presenter Felix Ramos recorded there chapter for a new tv show called "Secrets of the Chef".

The show is for the program "Junto a ti: Around The World" and it was shot with food critic Michel Forgues-Locroix. The menu was prepared by Chef Daniel Landabarea: Carrot cream with cinnamon and cocoa, fresh sprouts salad with vanilla and white chocolate, rump steak with dark chocolate sauce and orange with autumn vegetables and cake made of 3 chocolates. The guest of this program was the political analyst, journalist and writer George Chaya.