The Italian Job comes to Marbella! 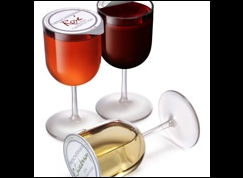 The wine will make its debut in Spain early next year Source: DSP

When James Nash, the inventor of this revolutionary concept saw glasses of wine being served at the Glastonbury Festival, little did he realise that a “Eureka” moment would result in him becoming the Managing Director of an international company supplying his product around the world.

After presenting his idea to “Dragon’s Den”, the BBC’s very successful angel investor programme, and being unsuccessful with the panel, a would-be investor contacted him and concluded the deal that would really get the idea off the ground. The wine in a glass called “The Italian Job” had become a reality from James’s dream.

Following a number of product tests at Rock concerts headlined by Elton John, Rod Stewart and the Red Hot Chilli Peppers where sales were almost 100% of the total attendance, James and his colleagues at Wine Innovations knew that they were onto a winner. Marks & Spencer, one of the UK´s premier supermarket chains, also had confidence in the concept and made the first of many orders with their own label wine “Le Froglet”. Sales exceeded everyone’s expectations and as a result other major supermarket chains also want a piece of the action and will likely list before the Christmas season.

A group of Spanish based entrepreneurs of Inova Spain, saw the idea, loved it and have recently secured the contract for distribution in the Spain. “The wine in a glass concept will be very popular at concerts, ferias, chiringitos and festivals said Simon Robertson, one of the Directors of the company, “We will test the market with “The Italian Job” and move to a Spanish wine product in the New Year” said Simon.

Make mine a wine!

Drink It Now or Cellar It?