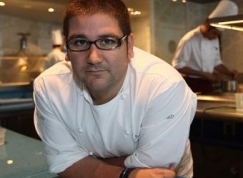 
The project which will launch Andalusian cuisine worldwide.

With the prestige of  two Michelin stars (the first gained in Tragabuches in Ronda and the second with Calima in Marbella), Malaga chef, Dani García, has embarked on a new adventure: the creation of an Andalusian Tapa Franchise: La Moraga.  However this is not a solo journey, García counts on the collaboration of the Junta de Andalucía through the Ministry of Tourism, Trade and Innovation, Sport and Science. Yesterday, the chef, together with Luciano Alonso; Director of Tourism, and Francisco Trigueros, General Secretary of the University´s Department of Innovation, presented at Fitur the project which will launch Andalusian cuisine worldwide . The initiative was presented at the Casino de Madrid in the presence of food writers and chefs of such stature as Juan Mari Arzak.

In the presentation, Dani Garcia said that this was one of the most important moves of his career and he was certainly “one of the happiest chefs in the world”. The idea came about two years ago, on the opening of La Moraga in Malaga, a haute cuisine tapas bar, or “Gastrobar”, the name coined by Jose Carlos Capell.  Dani García realized that the tapa is a part of Andalusia that can be easily exportable to the world.

But the project of the Andalusian Tapa Franchise goes further and is composed of five areas. The first of them is the Gastrobar, "where once lost flavours that we all  remember return and are cooked in a traditional way such as our grandmother´s ´croquetas de pringá`".

El Airport which will adapt the format to airports, so that passengers can eat typical Andalusian dishes, a possibility with which the chef is delighted: "I'm very excited to bring gazpacho to JFK”.  The first of these El Airport premises will be opened in the new terminal at Malaga airport at Easter.

Casa de Comidas will present traditional dishes such “Riñones al Jerez” o “Gazpachuelo malagueño” within an intimate environment whilst Dani García has sought an alliance with the pastry chef, Paco Torreblanca, to integrate El Sweet into the project, the shop specializing in desserts, so you do not miss any flavours in La Moraga.

The project is completed by a laboratory in the Parque Tecnológico de Andalucía de Málaga where chemists, biologists and nutritionists will work to improve, if possible, the various recipes from the chef and remain true to his innovative nature.  In the future there are plans for La Moraga Fish to join the franchise which will be a truly twenty-first century fried fish shop.

Dani Garcia showed his commitment to "be able to meet all expectations of the project, without disappointing anyone".  The projections for 2010 plan to incorporate six locations in Andalusian cities like Seville, Cadiz, Marbella, the airports of Malaga and Madrid and also, New York. "Being able to take a ajoblanco to Manhattan would be incredible for me and the Americans" said the enthusiastic cook.

In 2008, 2.6% of the tourists who chose Andalusia as a destination chose it for gastronomic reasons, 1.1% more than in 2007.  The figure is increasing every year, and for this reason, Luciano Alonso believes that Moraga will be a major attraction, since the restaurant business is essential and attractive for tourism".  In addition, he stated that "where there is La Moraga there will be Andalusia and a product of Andalusia.  For the Minister of Tourism, Dani Garcia is a great ambassador for the region and with initiatives such as the Andalusian Tapa Franchise "We are designing the present and the future."

TV show Secret of the Chef in Malaga (1)