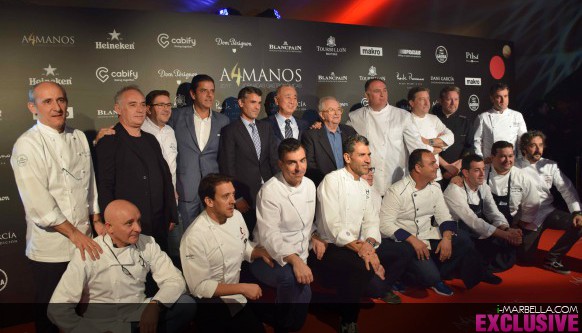 
Twenty Michelin chefs gathered on March 28th, 2017 in Marbella at the Fourth Edition of A Cuatro Manos by Dani García

A Cuatro Manos project was born of a dream Dani García had of creating gastronomic get-together where creativity and talent would be the guiding thread for some unique, exclusive and unrepeatable evenings.

The night of March 28 Dani Garcia, Juan Mari Arzak, Joan Roca, Albert Adrià, Josean Alija, Paco Morales, Angel Leon, Ricard Camarena, Ramón Freixa, Paco Roncero, José Andrés, Diego Guerrero, Francis Paniego, Paco Pérez, Toño Perez and Marcos Morán will pay tribute to the chef who laid the foundations of the Peruvian-Japanese fusion with a menu of 16 steps in which the umami will be the protagonist. Ferran Adrià, who was honoured in the 2015 edition of these days, will be the guest of honour of this tribute to fusion and diversity.

On the opening night, there was a cocktail for press and guests who have paid 300-500 for special dinner. The goal of that night was to get to know the chefs, make interviews and have a picture or two with them.

That evening's menu was prepared by all the chefs earlier. It was a culinary experiment where all senses were fooled by the genius and extraordinary presentation.

Nobu was born in Saitama, Japan. Nobu is a celebrity chef and restaurateur known for his fusion cuisine blending traditional Japanese dishes with Peruvian ingredients. His signature dish is black cod in miso.

In 1977, he moved to Los Angeles and worked at Japanese restaurants "Mitsuwa" and "Oshou", and in 1987, he opened his own restaurant "Matsuhisa" on La Cienega Boulevard in Beverly Hills, California. The restaurant quickly became a hot spot and was frequented by Hollywood celebrities, including Robert De Niro, who invited Nobu to set up a restaurant in Tribeca, New York City. Nobu restaurants were later opened in Milan, London, Greece, Dallas, Tokyo, Honolulu, Moscow, Dubai, Mexico City, Budapest, and Hong Kong.

Nobu's friendship with De Niro landed him a role in the 1995 Martin Scorsese film Casino, as a wealthy businessman who was a guest at De Niro's casino. He also had small roles in Austin Powers: Goldmember, as well as Memoirs of a Geisha, where he played a kimono artist.

Twenty Michelin chefs gathered on March 28th, 2017 in Marbella at the Fourth Edition of A Cuatro Manos by Dani García