Novak Djokovic Loyal to Marbella, working with Angeles Munoz to get it as Center for Elite National & International Sports @Puente Romano 2020
Restaurant

Secrets of the Chef with Footballer Efren Reyero 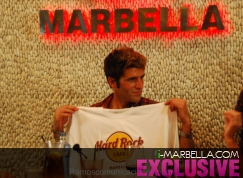 It was the making of the the new recording of the TV show “Secrets of the Chef" with the football player and TV contributor Efren Reyero.

He became famous with the "Men & Women & Vice Versa”, then he moved to work in Antena 3 as a reporter becoming known as their charitable and social work. Currently he is back in Telecinco TV projects. Efren participated in the TV show with Felix Ramos “Secrets of the Chef” at the Hard Rock Cafe restaurant and opened his heart and spoke about his entire career and future projects.

The Inks at Hard Rock Cafe