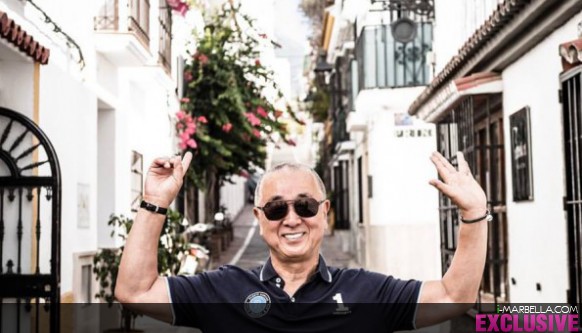 
Innovative cooking does not exist in a vacuum. It is influenced and inspired by its surroundings. Whether it be Japan, Peru, Argentina or even the far reaches of Alaska, he has discovered and combined ingredients and techniques that have evolved into the award winning cuisine we know today as Nobu Style.

Nobuyuki Matsuhisa – known to the world simply as “Nobu” – is the acclaimed and highly influential chef proprietor of Nobu and Matsuhisa restaurants located across five continents, landed in Marbella on Friday 14th of July of 2017 to check the operations of NOBU Marbella.

They were almost waiting for him with the red carpet. For any chef, cooking in a Nobu Matsuhisa restaurant is already a prize. Doing it with him is a gift. This is how the team of Nobu Marbella, the first restaurant of the renowned Japanese chef in Spain is living. He landed last Friday at the premises of the Puente Romano hotel to supervise the start of the business, which opened its doors last June 15 with the young Greek cook Eleni Manousou in front of his kitchen.

The social media among chefs in Marbella went crazy after finding out he was visiting Costa del Sol.

Nobu Matsuhisa spent a few days in Marbella getting to know the staff and training everyone involved to deliver top quality services and food. He spent time with Eleni Manousou, the first Woman Executive Chef of the Nobu group.

The famous chef had time to walk around the old town, to inspire all the team at NOBU Marbella, as well as to give the place a special and unique touch for the upcoming years.

He also promised to come back soon to spend more time at the new Spanish NOBU restaurant.

Here we leave you the gallery of his visit to NOBU Marbella.

The picture that went viral among chefs in Marbella, July 2017

Nobu is the world renowned Japanese restaurant recognized for pioneering a new-style Japanese cuisine. Nobu Marbella is the 34th Nobu in the world and first Nobu in Spain. Be inspired and never forget the most important ingredient of all – kokoro!