NOBU comes to Marbella 2017 instead of UNI 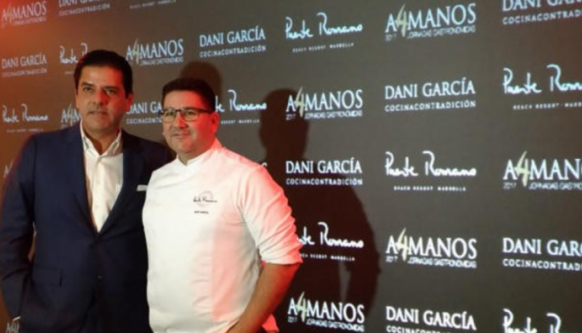 Twenty of the best chefs in the world gather from 27 to 31 March in Marbella in the Fourth Edition of A Cuatro Manos by Dani García. The night of March 28 Dani Garcia, Juan Mari Arzak, Joan Roca, Albert Adrià, Josean Alija, Paco Morales, Angel Leon, Ricard Camarena, Ramón Freixa, Paco Roncero, José Andrés, Diego Guerrero, Francis Paniego, Paco Pérez, Toño Perez and Marcos Morán will pay tribute to the chef who laid the foundations of the Peruvian-Japanese fusion with a menu of 16 steps in which the umami will be the protagonist. Ferran Adrià, who was honoured in the 2015 edition of these days, will be the guest of honour of this tribute to fusion and diversity. The rest of the day, the host of the event, Dani García, will offer in his restaurant of Puente Romano Beach Resort & Spa a menu prepared hand in hand with different chefs of international prestige: on Monday 27 he will do it with the Dutch Jonnie Boer, the Thursday 30 with Nobu Matsuhisa himself and on Friday 31 with the televised Jordi Cruz and Pepe Rodríguez. Marbella, March 2017.

-Fusion, diversity and friendship are the three concepts around which will revolve the Fourth Edition of A cuatro manos, a gastronomic conference led by two Michelin stars Dani Garcia that arose in 2014 as a disinterested meeting between friends and colleagues by profession. "An opportunity to see faces, exchange experiences and offer the public a unique and unrepeatable experience." On this occasion fifteen of the Spanish chefs with the greatest international projection have wanted to accompany the Malaga chef to pay a well-deserved tribute to the man who revolutionized the foundations of the very orthodox Japanese cuisine based on effort and imagination: the Japanese Nobu Matsuhisa, Nobu and considered as one of the best chefs on the planet.

In addition to the homage menu, which will be served the evening of Tuesday, March 28, Dani Garcia will cook four hands with Jonnie Boer on Monday 27 and with Nobu Matsuhisa himself on Thursday 30; While on Friday 31 he will do six hands with Jordi Cruz and Pepe Rodriguez. The 29 eight diners will enjoy a private dinner in the Atelier of Dani Garcia. FOUR UNIQUE NIGHTS The Fourth Edition of A Cuatro Manos will be held from March 27 to 31 at Dani García Restaurant, located in Puente Romano Beach Resort & Spa in Marbella (Málaga), and will consist of four unique nights in which diversity and Experiences from different parts of the world of the participating chefs will merge to create four menus that the public can enjoy prior reservation.

On Monday 27 and to open the day Dani García, will cook with the Dutchman Jonnie Boer, owner of the three Michelin stars De Librije, which is ranked 38th in the ranking of the best restaurants in the world according to the list 50 Best. Marker of trends where there are, Boer shares with the Malaga chef a very particular style that is based on the study and the value of the cuisine and the local product, delves into the taste, oozes technique and sensitivity and denotes risk, humour and creativity. Together they will elaborate a menu full of contrasts that, nevertheless, connects with harmony two cultures and two apparently opposite regions: Holland and Andalusia.