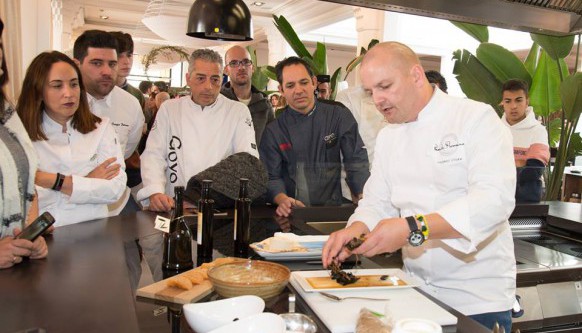 
Marbella All Stars POP Party took place this Tuesday 5th of November at Hotel Don Carlos promoting the Culture of AOVE in High Gastronomy aiming to achieve those gastronomic restaurants, Repsol suns, and Michelin stars improve their AOVE Collections to a minimum of 10 references ensuring major quality for the local cuisine

This way, the event went trough showing how with AOVEs the kitchen changes enormously depending on the variety of the olive and processing area, providing a unique personal touch to each dish.

The POP Party had the support and sponsorship of Sabor a Málaga which along with Marbella All Stars, the Brand of the High Gastronomy of Andalusia, decided to gather, in the festive atmosphere of gastronomic excellence of Hotel Don Carlos, twenty of the main AOVEs of the world, coming from all over Málaga, Andalusia and other areas of Spain

These new AOVEs, the Primum Oleum Premium, are the most valued gastronomically for their properties, aroma, and color, of an intense green, and are considered authentic gastronomic gems.

There were presented in total 20 major brands that presented their discoveries from their harvests made from more than fifteen different varieties of olives.

The mills outside of Málaga that presented their new harvests at the Marbella All Stars POP Party were these:

There was also an area of Harmonies from the AOVE in which such unique proposals could be tasted, such as the ice cream from AOVE by Helados La Perla, made in November.

Another feature of this event was the gastronomic proposals from AOVE and Black River Caviar, one of the ten best caviars in the world, created by Chef Daniel García Peinado for the POP Party and staged by the young Chef, Raquel García, from Nobu Marbella.

and all his team, these were the Chefs who made their creation with the power of the new presented AOVE and were part of the culinary catwalk:

Fernando Sánchez of the Buchinger Clinic

Martín Dorado, Chef of the restaurant 1870

Manuel Mérida, from the Best Tritón Hotel, from Benalmádena, who made Gachas

Charo Carmona, from Arte de Cozina de Antequera, who made his great Migas, two dishes closely related to the collection of AOVE.

This way the night highlighted the best of Marbella’s 5-Stars cuisine while offering a new step towards these chef’s perfection and promoting their venues in a unique event.

Fresh Stands at the POP party 2017

About Marbella All Stars

Marbella All Stars is the brand of the Association of High Gastronomy of Marbella that is established with the aim of continuing to promote the the best cuisine on the city, its synergies with the rest of the actors in the tourism sector, in addition to promoting events throughout the year that help to free the sector from season attachments.