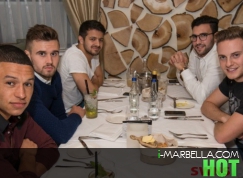 Spanish restaurant La Sala has scored in the UK market after opening a restaurant in north London – with backing from Arsenal star Alex Oxlaide-Chamberlain.

The food-loving Gunners midfielder was impressed when he visited the hit Spanish bar and grill in Malaga.

Oxlaide-Chamberlain and fellow footballer David Bentley are shareholders in the restaurant and opened a branch in Woodford Green.

The upmarket venue has already been a huge success with a string of celebrities visiting and bookings until the end of February.

Alex said he was pleased with how well La Sala had done and he liked the atmosphere.

'La Sala has a great vibe and I’m really pleased to be a part of it,' he added.

Within just four weeks bookings have been taken well into February, with the majority of weekends already snapped up. Nearly 5000 people are booked in to dine at the design-led restaurant already.

Chairman of La Sala, entrepreneur James Horler, who sold La Tasca for £135m, has been delighted with the response from customers and supporters.

He said: We've created something incredibly special. As of now, La Sala is now officially the place to eat, drink, and be seen, not just in Essex, but in the UK.'

La Sala to launch in the UK