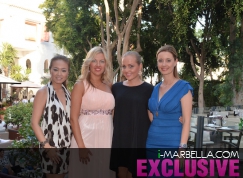 
A unique concept of restaurant, lounge & nightclub, Suite in Puente Romano Beach Resort brings you the fusion of Moroccan, Lebanese and modern European dishes in a spectacular Moorish setting. As you step onto the Arabic rugs, through delicate archways and huge carved wooden doors, Moroccan lamps hang from motif inspired domes exuding and ambiance of ancient Andalucia.

So everybody in Marbella knows Suite nightclub, but did you know it is also a restaurant as well? This unique concept combining a restaurant and a lounge has transformed Suite into one of Marbella's best restaurants. So our hopes were really high and it felt like they new it, since before the starters we were already served something that they called Mezze. Meze or mezze is a selection of small dishes served to accompany alcoholic drinks as a course or as appetizers before the main dish in the Near East and the Balkans. In Levantine, Caucasian and Balkan cuisines meze is served at the beginning of all large-scale meals. Ours consisted of little adorable plates filled with different dishes like, spinach, aubergine, pumpkin, peperana with mango sauce, Moroccon salad, beans, carrots and there was also harissa. Harissa is a Maghrebian hot Chili pepper paste whose main ingredients are roasted red peppers, serrano peppers and other hot chili peppers and spices and herbs such as garlic paste, coriander seed, or caraway as well as some vegetable or olive oil for preservation. So we ate all of them with a selection of different breads, including pita bread. Very delicious aperitif with wine, and for girls this was already a starter!

But we still continued to have a round of starters and dig deeper into the Moroccan and Lebanese food culture. We didn’t know so much about their food, so let me introduce you also to it a little bit before we go further. Lebanese cuisine includes an abundance of starches, whole grain, fruits, vegetables, fresh fish and seafood; animal fats are consumed sparingly. Poultry is eaten more often than red meat. When red meat is eaten it is usually lamb on the coast, and goat meat in the mountain regions. It also includes copious amounts of garlic and olive oil, often seasoned by lemon juice.; olive oil, herbs, garlic and lemon are typical flavors found in the Lebanese diet.

So the typical starters in a Lebanese/Moroccan restaurant usually are Kibbeh with Black Truffle and Pomegranate Juice, which is a dish made of burghul, chopped meat, and spices. It might not look so appealing, but it was one of the best starters! We also had the Falafel, that is a deep-fried ball or patty made from ground chickpeas or fava beans that came with Coriander and Tahini Sauce, Tabouleh (Parsley Salad), Baba Ghanoush (Pureed Roast Aubergine) and of course we had to try the Hummus, which is pureed chickpeas with Tahini. Despite not being a vegetarian, the choice and flavour of the vegetarian dishes was really exceptional. The hummus was creamy and and the falafel was addictive! Very different type of food if you haven’t tried it before, but its certainly a good experience.

Although we were already full, we had to try Suite’s main courses, since the starters were pushing the expectations higher and higher. And the mains were not a disappointment, only the size of our stomachs was at that point! The Salmon with Citrus Fruits and Lavender was a really beautiful summery fish dish, if you’re looking for something light. The meat lovers will have to try Cous cous with Chicken and vegetables, which is a typical delicious Lebanese food, and also the Lamb Kebab with Tahini Sauce. If you’re asking yourself what is Tahini, then heres your answer. Tahini is a paste made from ground, hulled sesame seeds used in North African, Greek, Turkish, and Middle Eastern cuisine. Tahini is served as a dip on its own or as a major component of hummus, baba ghanoush, and halva. The last main, Tiger King Prawns with Coriander and Lemon Sauce served with Cherry tomatoes and Pine nuts, was by far our favourite. So simple, yet full of flavour - finger licking good..

And last, but not the least, the dessert round. It already had gone dark and the people started to gather around the bar for a cocktail. We ordered the some beautiful summery Red Fruits that were spot on, since we were very full and needed a simple, light dessert.  And it was served so perfectly with some flowers, like a piece of art! The other two desserts we shared were the Lebanese Suite Nights, that reminded us a Pavlova cake, very sweet and creamy!

And the other one was the Kataif with Walnuts and Orange Blossom or you can also call it as the ultimate Arab pancakes. What sets these pancakes apart is that they are cooked only on one side, the other side is velvety because it is covered with bubbles, this allows the flavors of the filling to permeate the atayef. We would have never chosen this one ourselves, but it was absolutely delicious. We ended up finishing all of them, even though we were extremely full. But that only shows how pleased we were with all the dishes in Suite. Thank you to the staff and of course to the executive chef Thomas Stork.

Overall the service in Suite is like in a five star resort, since you’re in one! They are all extremely friendly and helpful and will suggest you dishes from the menu if you are a bit lost first time. So next time when you’re going out for drinks, make sure you book your dinner there as well, you will not be disappointed! Since At midnight Suite turns from an intimate dining experience to the most exclusive club on the Coast, offering it's guests a seductive selection of music from acclaimed European DJ's.

10 Minutes with the inimitable Charlotte Fisher… (7)

The Suite, "Prince of Clubs" Celebrates Seven Years of Success with a Purple Rain Party