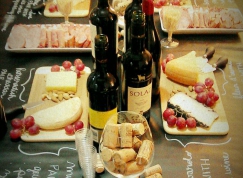 Any round up of experiential opportunities in Andalucia would be deficient without a mention of the festivals at any time of year as these fun-filled fiestas are one of the best and easiest ways to get a literal taste for the local culture.

However, autumn provides such particularly tantalising harvest celebrations as the chestnut festival in Alcaucin (31st October 2013) and the Ajo Blanco festival in Almachar (7th September 2013), celebrating the cold almond and garlic soup made with freshly harvested almonds.

Villanueva de Cordoba celebrates the famed Iberian ham with the “dia del jamon” on 12th October 2013, while Teba puts on a festival of artisanal cheeses on the first weekend of October. These are but a few of the autumn festivals, but chances are, wherever you may be in Andalucia, a fiesta is not far away.

This gastronomic delight, where cheeses from all over Spain can be tasted and bought, coincides with the Fiesta de Jesús el Nazareno. You can try over 30 different varieties of cheese from Andalucia alone while getting to know the area. More than 15,000 visitors are expected this year which means a lot of cheese!

Villanueva de Cordoba celebrates the famed Iberian ham with the “Dia del jamon” on 9-11 October 2014, while Teba puts on a festival of artisanal cheeses on the first weekend of October.

Alcaucin is a chocolate-box pretty village, located 54 kilometres from Malaga and 25 kilometres from the coast at Torre del Mar. At an altitude of 508 metres, Alcaucin is situated on the lower western slope of La Maroma in the Sierra Tejeda mountain range. It lies within the area of Axarquia, on the scenic Route of Olive Oil and Mountains, and has a population of 2,600. Info: Town Hall and Council: 952 510 002