Chef Gave Up His Michelin Star 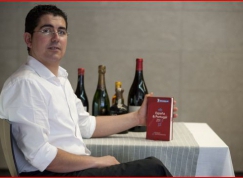 
The first time was on November 24, 2009. Julio Biosca had gone to bed after a wine tasting with only blurry memories of what had happened that night. At 8.30 the next morning, with his head about to burst, he noticed several missed calls on his cellphone.

They hadn’t been expecting it. They had never worked towards that goal.

Later came the euphoria. "It's not nice to say so, but it was fucking amazing. We were getting a star, little old us, here in the middle of nowhere, in a place where people get lost trying to reach us!" he remembers.

After that, Julio Biosca never slept well on the eve of the Michelin Guide announcements.

Then, four years later, he gave up his his star altogether.

Having Michelin stars is not a source of joy for everyone, and Julio Biosca is not the first chef to drop out of the select club. On February 24, 2003, French chef Bernard Loiseau blew his brains out with a hunting rifle when rumours began circulating that he would soon lose his third star. He was already suffering from depression, but his widow blamed it on the press.

Chef Alain Senderens decided to give up his three stars in 2005 and opened a debate about the falseness and servitude that define certain sectors of so-called haute cuisine. The last chef to follow this lead was Belgium's Fredrick DhIn Spain, 169 restaurants now share 203 Michelin stars.ooghe, who stated earlier this year that he wanted to be free "to serve a roast chicken, without being told that this type of dish is beneath a restaurant with a Michelin star."