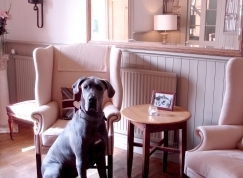 Henry at The Somerset Arms

Former Marbella residents Rachel Seed and Lisa Richards took the coveted "UK Food Pub of the Year" award at The Publican Awards, held at the Intercontinental Hotel on Park Lane, London last week for their stylish gastropub The Somerset Arms.

The two former Marbella based journalists took over the pub at the beginning of 2008 and totally refurbished the building, adding several beautiful rooms and opening to rave reviews in June 2008. The Somerset Arms sits on the breathtaking borders of Somerset and Wiltshire, just four miles from Stourhead’s renowned gardens and the Longleat Estate, in some of England's most beautiful countryside, and several famous names have already signed the guestbook including Kiera Knightly and Dan Gillespie-Sells of The Feeling, who described the pub as “The Soho House of Wiltshire”, while Elle Magazine called it the “epitome of new rustic cool”.

Having travelled the world reviewing restaurants and hotels, Lisa and Rachel are now firming behind the bar and in the kitchen wowing their guests with seasonal, local, delicious food; interesting wines; cosy rooms; a warm welcome from our staff and of course their famous blue Great Dane Henry, already a local legend in his own right!