Malaga wine for Her Majesty 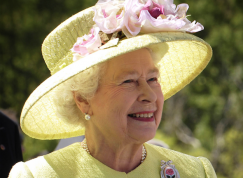 
The Malaga wine Nº 2 Victoria, by Jorge Ordóñez, has been served at a lunch for Queen Elizabeth II at Picton Castle.

Wines from Malaga never cease to surprise us, especially those from the boutique winery group Jorge Ordóñez. Back in 2012 one of the group’s four sweet Muscat wines, Nº2 Victoria, made from grapes grown in the Axarquía, was served with the desserts at the Nobel Prize dinner, a gala event presided over by Queen Silvia and King Carl XVI Gustaf of Sweden.

With a production of 20,000 bottles a year, the majority of which are exported, the Malaga winery has just chalked up another international achievement. Just over a week ago the Nº2 Victoria was poured again at a royal table. This time it was Queen Elizabeth II of England and the Duke of Edinburgh who were invited to sample the sweet wine at Picton Castle in Wales.

Their hosts, the Very Reverend Jonathan Lean, Dean of St David’s Cathedral, and the Chairman and Leader of Pembrokeshire County Council, Arwyn Williams and Jaime Adams respectively, had taken care of every last detail to ensure that the royal couple and the 30 lunch guests enjoyed their meal. Dessert, vanilla Panna Cotta with rhubarb, was accompanied by Nº2 Victoria, a wine, produced and bottled in Malaga, that costs around 20 euros a bottle.

“We are very proud, because it takes us back to a period in the 19th century when Malaga wines were served at the best tables in Europe,” said winery manager Victoria Ordóñez on Monday. She explained that the main reason for the international success of Nº2 is that “it really is very good”. “It is an unforgettable wine and you can never go wrong with it,” she added.

Nº2 Victoria was created ten years ago by Alois Kracher, who was one of the world’s most prestigious makers of sweet wines. He gave the wine, whose uniqueness has been put down to the quality of the grapes, the name Victoria.

In November last year another two wines from the same Malaga winery were chosen by the Queen Sofia Institute in New York for its annual Gold Medal awards gala. That year the winners were Hillary Clinton and Antonio Banderas. At that dinner, held in the Waldorf Astoria Hotel, the chosen wines were ‘Botani moscatel seco’ and ‘Botani moscatel espumoso’, both from Malaga, and La Cana, an ‘albariño’ from Rías Baixas, all made by the Jorge Ordóñez group. Malaga wines have certainly proved to be fit for a queen.