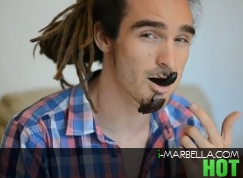 
Louis Cole has a Youtube channel and one of his videos reached 1 million. But what does he do? He eats live animals!

The channel of Louis Cole (28), who is living in west London, is called Food for Louis. In his videos he is eating for example a raw bull's heart, a turkey leg with maggots, a rotting dead frog, a smoothie made from 10 dead mice, a large live lizard, a live tarantula, live crayfish, live scorpion, 21 live locusts and also the most controversial from them all - "my pet goldfish".

Take a look at the videos below and tell us what do you think? Is he crossing the line or is it just great entertainent?