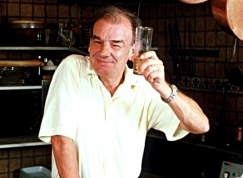 Many mourned the recent sad passing of TV’s original celebrity chef and all round gastronaught Keith Floyd. Keith lived happily for many years here in Andalucia before ending his long battle cancer in France. Channels 4’s spookily timed last interview (ominously the night before he died) was as funny as it was tragic, mirroring the highs and lows of this unique character. A string of high profile celebrity chefs including Gary Rhodes and Rick Stein revered the man and when asked what he thought of them, Floyd simply replied; “They are all a bunch of ****”!

Chef patron Lawrence Otterbourne of La Casita restaurant decided that a fitting tribute to televisions bad boy that gave cooking its rock’n’roll credentials was to throw a dinner in the great chef’s honour.

The intimate restaurant terrace was packed as Lawrence and team adorned bow ties and waistcoats in the great mans honour before serving a set menu created from Floyds own recipes.

To start a vast cauldron of steaming Moules Marinare was cooked al fresco in front of diners to be mopped up with fresh warm bread and a fabulous Sancerre. This was followed by a delicious plate of seared scallops served with Pancetta and cream with complimentary glass of Champagne. A small breather was interrupted by a rich lobster bisque to compliment the main of whole seabass and garden vegetables.

Despite the many courses it was rude not to accept a hearty portion of Floyd’s own take on Tarte Tatin. Diners were then wheeled to chariots after Brandy’s and coffee. A great fun evening on a normally dull Wednesday raising over €300 for Cancer research in the process.

Wednesday nights at La Casita will never be the same again as Lawrence is creating a new theme and set menu every other Wednesday starting with an American night. Expect there to be Asian, Mexican, Italian and even Spanish all with the same impeccable standards and frivolity. Bow ties discretionary.

Lawrence trained under Gordon Ramsey. Having consulted on the launch of dozens of restaurants, La Casita is his first private venture and has established itself in 18 months as a discerning locals’ favourite hideaway. They offer a fantastic value menu del dia for lunch (2 courses and a glass of wine/beer for only €14) and the Sunday Roast is a pilgrimage especially when he has suckling pig on offer. Directions – Take the Ronda road up from San Pedro, La Heredia is 5 minutes drive up on the right hand side and La Casita is over in the left hand corner as you drive in. Tel: +34 952 788 033

Summer sounds at Shiraz with Monty

Half Man, Half Guitar!!!