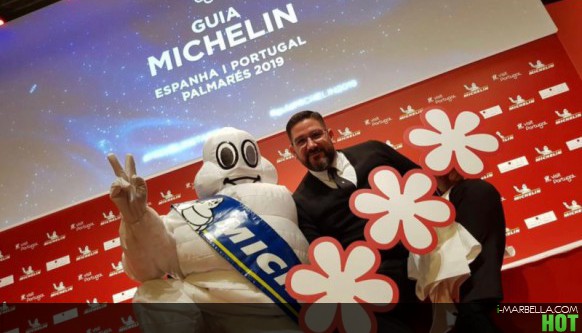 Dani Garcia was honored with a three michelin star during an evening ceremony celebrated in Pavilhão Carlos Lopes in Lisbon, Portugal 2018


Great news for Marbella’s gastronomic potential, Dani Garcia has obtained a maximum recognition getting the first three Michelin stars of Malaga in a ceremony that took place at Pavilhão Carlos Lopes of Lisbon a few days ago on November 21st, 2018.

Dani has become the first chef in Malaga with three Michelin stars, after being awarded the third for the restaurant which bears his name at the Puente Romano. Congratulations Dani and all his team. The recognition also goes to Restaurante El Lago, Messina Restaurante and Restaurante Skina for each maintaining its Michelin star.

Dani Garcia has made history. The Marbella's 3 Michelin star has become the first three Michelin stars of Malaga by winning one more for his restaurant

He received the Michelin Star on Wednesday 21st in a gala celebrated in the Pavilhão Carlos Lopes of Lisbon, thus joining the podium of the eleven tri-stars that complete El Celler de Can Roca, Arzak, Akelarre, ABaC, Aponiente, Lasarte, DiverXO, Azurmendi, Martín Berasategui and Quique Dacosta (this year Sant Pau, by Carme Ruscalleda, is dismounted by closing).

As pointed out in the Michelin Guide, the inspectors have awarded Marbella the highest distinction "thanks to its unique way of reformulating Andalusian cuisine in a contemporary key, making each preparation tell a different story based on a product that links up with local tradition". They were also particularly surprised by "the play of contrasts" and by "the staging of a good part of their dishes".

“I cried with joy with my mother, my daughters, my partner, my team… I am very happy. After 20 years of work, this is another step up. Now I will enjoy the moment and reflect,” García said after winning the third star

It has been the great news for Malaga in this edition, in which the rest of Malaga's restaurants conserve their shine: José Carlos García (the only one in the capital); El Lago, Messina, and Skina, in Marbella; Sollo (Fuengirola); Bardal (Ronda); and Kabuki Raw (Casares).

They all celebrate maintaining the Michelin stars, although one of them is especially happy. Marcos Granda, who gets his first star in Madrid with Clos, a restaurant that opened just a year ago in the capital.

"Portugal has become a tourist destination of reference and much of that success lies in the rise of its cuisine. It is true that traditional Portuguese cuisine has always had the approval of the foreign public. However, today we are confirming a vigorous boost in the haute cuisine of this country, usually led by a generation of young chefs," said the international director of the Michelin guides, Gwendal Poullennec.

Great news for Dani Garcia and Marbella!  With your potential, Marbella preserves its gastronomic potential.