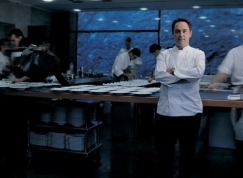 The world famous  El Bulli restaurant will shut for two years to allow Head Chef Ferran Adria to compile an encyclopaedia of the recipes that have made it one of the world's most celebrated eateries.

Chef Adria - told food lovers at the Madrid Fusion gastronomic fair on Tuesday that the three-Michelin-starred restaurant will close its doors in 2012 and 2013 and re-open again in 2014.El Bulli was voted the world's top restaurant for the fourth year in a row last April in the S. Pellegrino World's 50 Best Restaurants 2009 compiled by Restaurant Magazine.

Located in the northeastern Catalonian coastal town of Roses, El Bulli already closes for half the year so that Adria and his team can work on new creations. Adria's team has used scientific research to invent new techniques, such as substituting agar-agar jelly for gelatine, because they found it can be used at higher temperatures. Costing about 230 euros a person and serving dishes like lamb's brains with sea urchins and sea-grapes, detractors have branded elBulli as pretentious and elitist.

But supporters note that Adria -- who has been lone head chef since 1987 -- has helped popularise appliances so that amateur chefs can imitate his foamy dishes on a budget at home. By the way don't even bother. It is fully booked for 2010.

El Bulli no longer the Best!