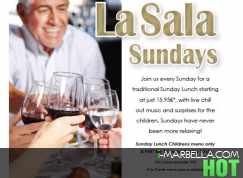 Join La Sala Puerto Banus every Sunday for a traditional Sunday lunch starting at just 15.95 EUR, with live chillout music and surprises for the children, Sundays have never been so relaxing!