10 Minutes with the Head Chef in Pravda - Dennis Wellerfors 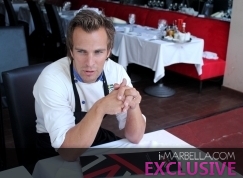 
Dennis Wellerfors comes from Sweden, but for the last 8 years it is Spain that has been his home. Although his first passion was motocross, he is now the head chef in a newly reopened restaurant in Puerto Banus - Pravda. Located on the front line of the famous marina at Puerto Banus, nestled in between the world’s most luxurious clothing retailers, Pravda has become an internationally renowned restaurant and lively bar. i-Marbella had the opportunity to meet the man behind the contemporary international cuisine menu in Pravda - Dennis Wellerfors.

1. How did you started your career as a chef?

Actually I had no idea I was going to be a chef. Because I had no idea what to do and the only passion I has was motocross. At one point I went to the chef school in Sweden, which I never graduated, but where I learned a lot. The thing with cooking was that it was something that came really naturally and 9 out of 10 I prepared good dishes.

2. How long did it take for you to become the head chef?

I started out as a dishwasher, then became the kitchen assistant and so on. I have also worked as a waiter, barman, restaurant manager, head chef and now I am also one of the owners of Pravda. It was after only 1,5 years. I guess I have always been a leader and people can trust my work. I am a man of my word - when I promise, I deliver.

3. Is trying out so many different jobs helped you in some way today?

Of course! Having worked in every position in a restaurant gives you a very good insight of a restaurant business and therefore I am very aware of all the problems. I think it makes me a better leader. Actually I worked in Pravda before as well - from 2004-2006 and now I'm back again!

4. What is the most important thing for a restaurant to serve quality food? Is it all about the head chef?

It is not just about the head chef, it is about the whole team in the kitchen. It is a team effort. I have 5 other people in the kitchen working with me, I couldn't do it alone. It is not a one man show! What makes a good head chef is the one who teaches, leads and earns his respect in the kitchen.

5. Tell us something that people normally forget when it comes to your job.

Well, chefs is that it is not just about putting the food in the oven or cooking something. I would say cooking is 75% preparation! Because in the kitchen you have to be fast. If you have seen Gordon Ramsey's tv shows then it is pretty much like you see it there, it is pretty brutal. No time to fool around! If you are more interested in it read the book "Kitchen Confidential: Adventures in the Culinary Underbelly". This is a New York Times bestselling non-fiction book written by American chef Anthony Bourdain.

6. You created the menu in Pravda. Why is it different from other restaurants?

Our contemporary international cuisine menu offers a selection of everything and the names of the foods are a bit different than in some other menu. I named the food by the city or country where the specific dish is from. I am very proud of my menu and I am responsible of every dish that goes out of the kitchen. If it doesn't look or taste right, I'm not putting it on the table!

7. What is the most popular food in the menu?

I think the antipasti:it's a daily selection of 5 small dishes from all over the world and every day it varies. Sometimes people come here two days in a row and want to order the same antipasti, but it's not possible. But you don't have to disappoint, it's always something delicious.

8. What is the best side of your job? And the downside?

I love the mixture of people who surround me. To me it is the best! The downside.. I guess having no personal life or family. And usually everybody is working when I am not!

Actually no! Because I do it everyday in Pravda and when I go home I don't want to start "working" again. And I hate cooking for myself! I love doing it for other people, for the clients.

Not really, but when I had to choose I would probably say hamburgers or French fries. To me this is not gastronomy!

11. What is your favourite dish?

This one will surprise you, but it's Pizza! It is very simple, but always works for me. Talking about more sophisticated foods I would say foie gras with steak probably.

As I said before, I love motocross, so that's what you'll find me doing when I'm not at the restaurant.

Taste of the Orient at The Orchid Room… (2)