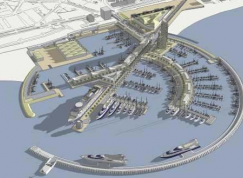 The Sheikh's representive gave the information to the Marbella Mayor.

Despite the Sheikh Abdullah Ben Nasser Al Thani reportedly putting Málaga Football Club up for sale, his project to extend the La Bajadilla Marbella Port moves ahead with delays. The representative of the Al-Thani Group, Moayad Shatat, has assured the Mayoress, Ángeles Muñoz, that the port is a priority project for the company, Nasir Ben Abdullah and Sons.

There is still no starting date for the construction work, but the environment department of the Junta de Andalucía has undertaken to have a report on the effects of coast shortly.

The project will finally be in the hands of the Junta for its revision.