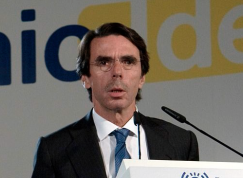 Diario SUR reveales that José María Aznar has bought a huge luxury villa in Guadalmina Baja area, right by the sea. This area was developed in the 1950s and its located right next to the Guadalmina Golf Course. Aznar’s new house is more like a mansion with high walls around it to get the ultimate privacy. Previously José María Aznar had a flat in Guadalmima Alta. Now him and his wife Ata Botella are neighbours to Marisa de Borbón, Isidoro Álvarez, family Goizueta and also to the journalist José María García.
.
According to the broker Aznar’s plot is only worth 1.4 million euros and the villa itself is 304 square meters big, but since it has not been used during the last couple of years, the reports say that the property is undergoing reforms that started already a few weeks ago.