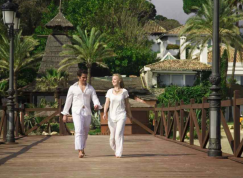 The measure is aimed at the Russians and Chinese.

The Government released their plans on Monday but the foreigners must spend 160,000 € on the property. Similar reforms have taken place in Portugal, Ireland, and U.K. and Canada.

The objective of this legislation is to sell the flats and houses which were built during the construction boom, and now lie empty desperately waiting for a buyer.

Provided the foreigner has 160,000 € to spend, he will be given nearly automatic permission for a temporary residence.

Another obligation for the immigrants is they will have to spend six months and a day in Spain each year. But the immigrant associations have described the plan as ‘unjust’, while the PSOE accused the cabinet of turning a treat into a mere commodity.