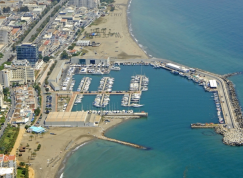 With or without Jesus Gil’s controversial arch, Marbella will soon have a fantastic new jewel to flaunt at the eastern approach to the centre.

Plans to extend and revamp the port at the eastern entrance to Marbella – in a joint venture between the Qatari sheik, Abdullah Al-Thani and Marbella Town Hall – which has a 3 per cent stake in the project – have been selected over other bids by the Junta de Andalucía.

An initial investment of 84 million euros will be made in the project, the first jointly public privately funded venture in the region. Which will include extending the wharf to accommodate cruise ships, bringing in a new wave of possibilities for the town as a tourist destination.  Plans to incorporate luxury leisure facilities including a shopping mall and a 5-star hotel will notch up a total investment of some 400 million euros, creating thousands of jobs into the bargain.

Currently the port is the hub of the town’s fishing activities, which according to the plans, will be moved to one side of the port, making way for a spectacular new circular pier of some 900 metres in length, giving the port an allure to perhaps rival or outshine the town’s harbour for super yachts, Puerto Banús.

500 More Yachts
The overall area accommodating boats will be extended by 30 per cent, with an additional 500 moorings for yachts.  The project also takes in an underground car park to complement the existing parking space in the area.

The newly approved port project will be given a concession for a 40-year period, and forecasts indicate the initial investment will be covered in the first seven years.

Where is the Marbella character?