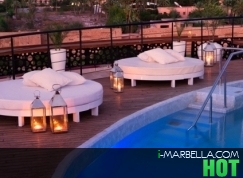 The MC (Marbella Club) Hotel Group announces the expansion of their famous Marbella Club brand, through the launch of the Group's Namazake restaurant and Suite Lounge venues at the new Delano Marrakech in Morocco.

Delano Marrakech is a self-contained luxury resort in the center of one of the world's most magical destinations. Located in the heart of the Hivernage district, the 71-room boutique hotel boasts four culinary destinations, a world-class spa, three pools, luxury boutiques and a dynamic nightlife venue.

MC Hotel Group also has plans to bring their acclaimed Suite Lounge to Delano Marrakech as an exciting underground nightlife venue, which is scheduled to open in 2013. Both Namazake and Suite Lounge venues have outposts at MC Hotel Group properties, and in Marbella they have established an enviable reputation as places to see and be seen, frequented by celebrities and glamorous world-travelers.

"This is the first time that our Group has taken an ownership stake in a hotel which does not carry one of our MC brand names or management team," said Daniel Shamoon, Founding Director of the MC Hotel Group. "This reflects the high esteem in which we hold Morgans Hotel Group and the Delano brand. It is also the first time that we have launched our Namazake and Suite Lounge venues in hotels that are outside of our Group property portfolio. These new openings form part of our current expansion strategy which is to sell and launch our MC branded food and leisure concepts to other hotel groups who share our focus on quality, luxury and outstanding customer service."

Commenting on the collaboration between the three prestigious hotel groups, Michael Gross, Chief Executive Officer of MorgansHotel Group, said: "Delano is a truly iconic brand, synonymous with luxury and unrivalled standards of service. We are excited to be working with Ahmed Bennani, who has invaluable local market experience, and the MC (Marbella Club) Hotel Group, whose expertise in the dining and nightlife space will truly elevate the Delano Marrakech experience. We hope to continue our partnership the MC Hotel Group and explore ways to collaborate on future projects."

Delano Marrakech's ideal location at the inner core of one of the world's most culturally rich cities allows guests the perfect home base for discovery and exploration.