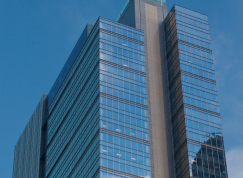 People Power has been spared the nightmare scenario of skyscrapers being built on Marbella’s Golden Mile. It comes after the town hall admitted it had made a mistake as they bowed to public pressure at a specially called meeting this morning. At the meeting at Marbella Town Hall, Mayor Angeles Munoz confirmed that the scheme would not go ahead. It came after the new Town Hall Plan (PGOU) for Marbella allowed for the building of up to SIX 50 storey skyscrapers. At the heated meeting, the opposition parties united against the project, and demanded the mayor give an explanation for three things. They wanted the mayor to make a personal statement about why she had allowed the PGOU to be changed without consultation.

Secondly that in future any further changes to the PGOU would have to be passed by a two-thirds majority and three, that finally she would confirm in writing that the project would be scrapped. Munoz finally agreed to the third demand, meaning that there will be no skyscrapers in Marbella. All this was bad news for promotor Pedro Rodriguez, who had told the Spanish Press that without the skyscrapers, “Marbella cannot compete with destinations such as Dubai”.

Last night Rodriguez had telephoned the opposition trying to get his project pushed through via a compromise that he would only build 30 storey skyscrapers instead. This was flatly rejected. A spokesman for the group Plataforma Marbella Contra Los Rascaciolos set up to fight the scheme, said: “This is a fantastic victory we are very happy. It says a lot for people power.” PSOE councillor Ana Leschiera de Giraudo added: “This is a great result for the ordinary people of Marbella. It shows that the town does not exist only for the super rich.”

The opposition to the project included aristoracy including the Duchess of Alba, as well as figures from Spanish society and a social media campaign that gathered over 2,000 signatures. Another factor was also the Saudi Royal family. Long established in Marbella, Prince Salaman warned the Town Hall that the moment work was started building the first skyscraper – which would overlook the Royal Palace – the Saudi Royal (and their retinue of 6,000) would leave Marbella and never come back.