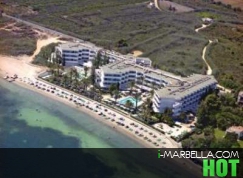 
The Hotel Playa Real in Ibiza is now owned by a British family who are also the proprietors of the Puente Romano and Marbella Club hotels in Marbella.

The company, that is currently headed by Iraqi-born British businessman Daniel Shamoon, is the new owner of one of the oldest hotels in Ibiza called Playa Real and the new owners say that they will carry out ‘a total reform’ to convert the establishment into a place of maximum luxury. The 250 room hotel is located in an exceptional location, and after the reforms the number of rooms will be fewer, but larger.

Daniel Shamoon with his wife Nadine

The Playa Royal was previously rented by the Playa Sol Group. The director of the company Ximo Sola, expressed his regret at the loss of the establishment ‘Because it is very good and in a very good location’. The luxury hotel is located in Talamanca area.

The new owners say the reform works will start soon, but the hotel will be closed in the next season, as the work is expected to take several months.