Marbella marina dead in the water? 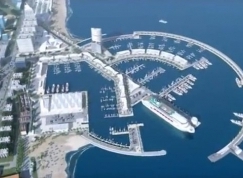 The control tower stands abandoned and there is no security patrolling the harbour.

A mere two years after Sheik Al-Thani vowed to redevelop Marbella’s La Bajadilla fishing port – with promises of superyachts and cruise liners – the port has never looked more down-at-heel. The €400 million promises of a counterweight to Puerto Banus, with beautiful people sipping cocktails and designers shops abuzz with business, could not seem further away. Indeed, the only things flying around Marbella over the last week have been insults and accusations as the Andalucian Ports Authority (APA) and the Junta finally threatened to revoke Sheik Al-Thani’s contract to expand the port.

The Junta has accused the owner of Malaga FC of “failing to comply with the obligations of the contract” and insisted that other investors, including a British conglomerate, were now looking at the project. Meanwhile Miguel Angel Paneque of the APA explained that they had recently been forced to take emergency measures to ensure the safe running of the port. While the Sheik was quick to tweet that he wanted his project to be treated with “equality, justice and fairness” most observers believe it is now dead in the water.

The stumbling block for the Sheik’s investment has been the modification of the original plans approved by the Junta. On planning grounds central Government reduced the size of the planned commercial centre by half and rejected a proposed luxury hotel in the port. As the Sheik’s representative Moayad Shatat stated this week. “If they respect the initial plans approved for the port of Marbella we’ll start tomorrow” But, assuming they won’t, the Sheik has refused to carry out any of the preparation work for the project, or pay the agreed fees of €750,000 a year for 2012 or 2013.

With the situation seemingly at an impasse, Marbella mayor Angles Muñoz asked the Junta for help in finding an investor should the Sheik pull out. Muñoz was also in the Middle East last week at a trade fair seemingly looking for possible investors. At home tourism councillor José Luis Hernandez claimed that Marbella was always discriminated against when it came to public funds. The La Bajadilla Port project, which was being heralded as a glitzy symbol of Marbella’s future, now looks in danger of turning into yet another white elephant.