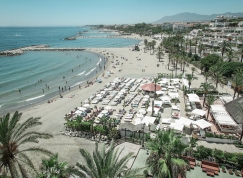 
Marbella, Estepona and Mijas are already working on extending their seafront promenades so that one day the three municipalities will be connected.

Imagine a single seafront promenade, more than 50 kms in length and with no obstacles for pedestrians, between La Cala de Mijas and Estepona. For the moment this is just an idea sketched out on paper but the Town Halls of Mijas, Marbella and Estepona are already working on projects which could one day become part of that idea. At present these councils are focusing on improving the coastlines of their respective municipalities as these are a major attraction for thousands of tourists all year round, but as these plans come to fruition they open up the possibility of a single seafront promenade some time in the not too distant future.

Mijas and Estepona are somewhat late starters in the race; Marbella is well in the lead with several kilometres completed and large amounts of money invested. Its neighbours are now bearing the hurdles faced by Marbella in mind as they begin their own projects. Six years, more than 6,000 metres of new promenade and an investment of more than 11 million euros have meant that the Marbella seafront is now linked from La Bajadilla port to the beach in San Pedro Alcántara. Barely a dozen kilometres are left, and only a few hurdles to overcome, to join up all of Marbella’s 27 kilometres of seafront promenade, but the people of Marbella can already walk, cycle or skate along the first 17 kilometres without finding any insurmountable obstacles in their way.

The first part of the project was to join the stretch of promenade from Marbella town centre to La Bajadilla port. The wooden walkway across the rocky terrain at Ventura del Mar, the 70-metre bridge joining Marbella with Puerto Banús and the wooden walkways across the streams at Las Chapas are just some of the most outstanding features of this project which is still ongoing; that was just the beginning. This year other new stretches will continue towards the east as far as Río Real and to the west as far as the Ventura-Guadaiza extension. These works will cost about four million euros from planning stage to execution.

Little by little, what were previously impassable obstacles, such as river mouths, have been overcome by pedestrian walkways, wooden bridges or the use of special surfaces. The presence of cliffs, streams and privately-owned properties have kept legal specialists busy, but other institutions such as the Agencia Andaluza del Agua and the Coastal Authority have also been closely involved.

“The result is a complete change of image for the seafront in Marbella,” says Public Works councillor Javier García, although he also points out the difficulties involved in a project that was begun by the present council six years ago and has been financed by municipal funds with help from the provincial government and, to a greater exent, by the regional ‘Qualifica’ tourism plan.

While Marbella is advancing its coastal path towards the east, the neighbouring municipality of Mijas is also planning three new stretches of coastal path, between La Cala de Mijas and the boundary with Marbella. As in the Marbella projects, the emphasis is on the use of environmentally-friendly materials.

With the clear aim of “preserving wherever possible the natural charm and the landscape of the Mijas coastline”, the team headed by the mayor of Mijas, Ángel Nozal, has designed an initiative which will cost two million euros and will be financed by the provincial government’s ‘Plan de Inversiones Productivas’. The works will be carried out in two phases. The first will involve the construction of a path between La Cala de Mijas and El Juncal beach restaurant in Riviera del Sol, which involves a distance of 3,073 metres; and the second will be from El Capricho to Calahonda Royale, a distance of 1,334 metres.

The conditions of the contract, which foresees a maximum completion period of six months, stipulates that 55 per cent of the path should consist of wooden walkways, 13 per cent of pressed concrete and the rest compacted clay. To complete this tourism and environmental project, the Qualifica Consortium of the Junta de Andalucía is taking charge of drawing up the plans for, and the financing of, the 1.5 kilometres that remain to the boundary with Marbella.

The project in Estepona is the most ambitious: it involves joining up more than 20 kilometres of coastline via 12 pedestrian paths and thereby connecting areas of seafront promenade and coastline which are isolated at present. This initiative is also planned as a new tourist attraction, because it will enable people to walk along stretches which until now have been inaccessible.

At present the council has the plans for three of the stretches, which have been drawn up by municipal technicians. These are the extension to the promenade at La Chimenea-Playa Bella, Cabo Bermejo-Residencial San Jaime, and Mar Azul-Hotel Kempinski.

The four million euros this initiative in Estepona will cost have already been allocated. Seventy per cent will come from funding under the Plan Qualifica and the remaining 30 per cent will be paid by the council.

For this reason, the project needs to be carried out quickly because the funding must be used this year. “The idea is for the works to be finished in December, so we are arranging for the plans to be drawn up, the reports to be prepared and the contracting conditions to be laid down at the same time so the works can start as soon as possible,” explains Town Planning councillor Susana Arahuetes.

As in Marbella, the new stretches of coastal path in Estepona will include pedestrian walkways, wooden bridges, compacted clay or paving, depending on the characteristics of each area. The extension of the seafront promenade will be completed in different stretches: Hacienda Beach-La Chimenea, Punta de la Playa, Kempinski-Laguna Village, Laguna Village-Dominion Beach, Dominion Beach-Bahía del Velerín, Residencial San Jaime-Park Beach, Saladillo, Benamara-Playa Baños, and Alcazaba Beach-Pinillos.

For the moment, advancing in the Marbella direction (through the Guadalmina area) is not included in the most immediate plans for the coastal path although, as Estepona’s Town Planning councillor admits, “nothing is impossible”. The connection between the two municipalities will not only have to pass through Guadalmina but also Isdabe, where numerous properties are very close to the beach. “It can be done. We have to think of different options to find the most suitable one for each stretch,” says Susana Arahuetes.

As in the neighbouring municipalities, the idea of extending the seafront promenade in Estepona is not only for tourism but also for environmental reasons and the need to protect the coast.

“The problem we are finding is that many of the walking areas that already exist are no use because they come to an end and they are not in good condition. The idea is to provide continuity and encourage people to walk. With some of the new stretches, we will put an end to situations which exist at present, such as having to use the car to travel from one residential development to another because there is no other way,” explains the councillor.

Cliffs, streams and stony areas have acted as natural barriers for years, making it impossible for people to walk for very far beside the sea. Now, the plans being put into effect by these Town Halls on the western coast will mean that many of these obstacles can be overcome. However, it will not be easy. Marbella’s experience has shown that it can take months to prepare a single stretch of coastal path. The need to protect the environment demands special care when carrying out the works, and specific materials have to be employed. The coastline is different in each municipality, but the work which is being done now may eventually result in a single seafront promenade linking the three different areas.

I CAN Triathlon on 3rd of April