Is that Vladimir Putin's new villa in La Zagaleta? 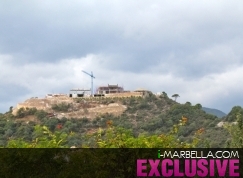 
The word got out quite a while ago that none other than Russian President Vladimir Putin has bought a property in the exclusive gated mansion club of La Zagaleta.

It is rumored that what Putin has in fact bought is an existing villa on a large tract of private land. While this property is in itself a modern palace it will apparently not do for Russia’s number one, so he has already knocked down the mansion and started work on a new 4,000m2 palace. By the way, the villa itself will have a built space of 4,000m2, for it stands on almost two hectares of private land.

The cost of the new retaining wall alone would buy you one of the smaller properties in La Zagaleta, while the multiple-bedroom villa will also feature a complete spa, cinema, gym, entertainment areas, a piano bar, two swimming pools, extensive grounds with further pools and cascading fountains, a multi-car garage, a vineyard, a helipad and no doubt secure rooms and secret passageways for a man for whom security is always a serious consideration.

La Zagaleta is Marbella’s private millionaire community known to be one of the most exclusive in Europe, Putin’s palatial villa puts even those of the other residents to shame, challenged only by the very largest and most luxurious properties in Marbella. Those who live in the urbanization have the right to vote on whether or not to accept any new neighbor, and Vanitatis reports that some of the people who have been rejected include Julio Iglasias, Shakira and David Beckham. Hugh Grant was accepted however. Other residents are one of the most important leaders of Iran, Ak Kujala, who was indicted in the Ballena Blanca money laundering case, and the British businessman Sean Woodhall who has been found guilty of fraud in the UK linked to car sales".