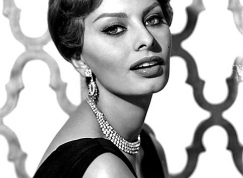 The highest flat in Spain and former home of Italian actress Sophia Loren is up for sale in Madrid.

The glamorous film star set up home in the 32nd-floor pad in the Plaza de Espana when filming El Cid alongside Charlton Heston in 1960. Currently being refurbished, the tower is the only one in the capital with both flats and commercial premises for sale.

Apartments in the bottom half are selling for anything between €400,000 and €825,000, while the first 10 floors will be a five-star hotel. The 1950s-built Torre de Madrid skyscraper pioneered luxury living and was certainly fit for the world’s acting elite.

Loren enjoyed 24-hour security, a fully-equipped gym, parking, a doorman and other perks. The international icon is Italy’s most-honoured actress and winner of the first Oscar awarded to a foreign-language performance for her role in Two Women in 1962.