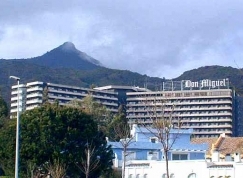 The pioneering hotel in the town has been closed for eight years.

The 80 ex workers at the Don Miguel in Marbella will finally be paid their wages which are still owed to them eight years after the establishment closed.

An Arab group based in Luxembourg, Fundación Magna Invest, through its Spanish company Magma Hotels and Resorts, has purchased one of the pioneering hotels on the Costa del Sol in its heyday. Now the new owners want to return it to its former glory as luxury 5 star hotel, and the refurbish will take two years.

The 550 room hotel is on a 70,000 square metre plot which includes a large tropical garden. 32 of the rooms are suites, 28 conference rooms, five restaurants, four swimming pools, 15 tennis courts and new spaces for an artificial lake and waterfalls, a spa, and fitness and disco club are all to be added.

Mayor of Marbella, Ángeles Muñoz, described it as excellent news. She noted this was the first establishment to close because of the crisis, and said ‘its recovery is key for the recuperation of Marbella and would bring credibility and confidence to the town’.