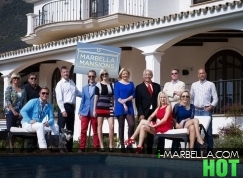 Marbella Mansions, exclusive to the Home channel, follows British estate agents and interior designers working in the region’s property industry. One address with the wow factor is the €8.1 million Guadalmina Desire, which was designed to appear as though it is floating on water and whose cinema, swimming pool, wine cellar and spa can all be controlled by an iPad.

Some of Marbella’s most lavish and eccentric expats make up the cast, including designers Jonty Richard Lewis and his partner Sebastian Mcleod. The pair, well known in the Marbella area, have already built a luxury dog house costing over €12,000 for a local Italian millionaire.

The show also follows Nicky Dalli, son of famous opera tenor, Tony Dalli, as he designs and builds some staggeringly expensive homes including a €14 million hillside mansion which overlooks the town.

The first episode of the 10-part series aired on September 10.