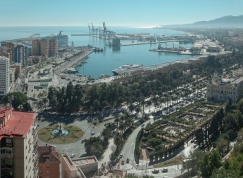 
More than 120 shops have joined Malaga City Hall's attempt to encourage shops to open on Sundays and holidays when cruise ships are docked in the port.

Known as "Málaga Cruise Shops", only 20 shops had joined when the initiative was launched at the beginning of last September, a number which rose to 40 in October.  A City Hall spokesman said the latest figure surpassed all expectations. He said since then the news had got around that the income of the shops taking part had risen considerably, encouraging other stores to join.

Last year, there were 66 Sundays and holidays and 31 cruise ships in all docked at the port on those days. This year, the shops which join the initiative will be asked to open from 9.30 am to 2.30 pm on those Sundays and holidays when cruise ships are in the port.  City Hall will prepare pamphlets and maps which will be emailed to the ships 24 hours before they dock at Malaga to be made available to the holidaymakers.

El Corte Ingles Open On Sundays in the Summer (2)