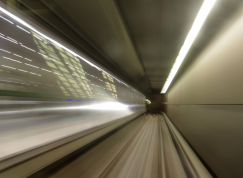 
Susana Díaz has finally cleared the backlog and work can now restart on the Line One into the city.

The Mayor of Málaga, Francisco de la Torre, has always said the train must be underground in the Alameda, but the Junta de Andalucía has always said a surface train would be cheaper and faster to introduce. The stagnation between the two sides has lasted for over a year.

Residents of Málaga City have seen many of the central streets dug up for the Metro and they will be pleased that a decision has finally been agreed.

During her inauguration speech, the new President of the Junta de Andalucía, Susana Díaz, said the completion of the Málaga Metro was a priority. Just weeks later now the Junta has agreed the line will go underground in the city centre.

The cost will be some 70 million €, 50 million for the underground section at the Alameda and 20 million for line 4 which will go to Ciudad Real.

First train arrives in Málaga for the new metro system (1)

San Pedro tunnel to be finished by Christmas (2)