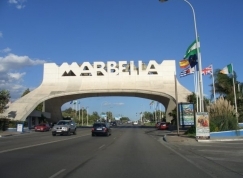 The majority of occupied properties will be licenced

Demolition work started last  week on an illegal development in the Golf Río Real area of Las Chapas, Marbella. The block in question consisted of 34 apartments built by Naviro Inmobiliaria on land designated as a green zone.

Under the new PGOU plan for Marbella, this apartment block would not be legalised. What made this block one of the main candidates for demolition was that unlike many of the other 18,000 properties with planning issues in Marbella, this development had not been sold nor occupied. This is also the case for the other development that is soon to be knocked down.

The development was supposed to have been torn down within 2 months of the order being given, which was in September, by the promoter. Obviously more than 2 months have passed since September, but the order was executed by Naviro, not the townhall. Naviro Inmobiliaria is owned by the Granada businessman José Ávila Rojas who faces charges in the Malaya corruption case.

The development that appears to be marked for demolition is Linda Vista, located in San Pedro, a development of six small houses build by Prosavi which was also built on land designated green zone.

This is a small but positive step in sorted out all the planning ‘issues’ surround the Marbella property market. It appears that a majority of the properties in Marbella will be legalised, especially those that have been sold to people who bought in good faith.