House Sales on the Up! 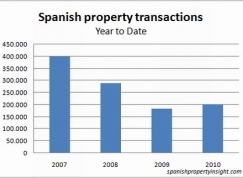 The market shows signs of bottoming out

The Spanish property market appears to have bottomed out, at least in terms of transactions, but there is no sign of a strong rebound in sales.

Excluding social housing, there were 33,581 residential property transactions in June, 5.5% up on the same month last year, according to the Government’s figures (INE).

Month to month, sales fell 1% in June compared to May. So the market may have bottomed out, but there is no strong rebound underway.